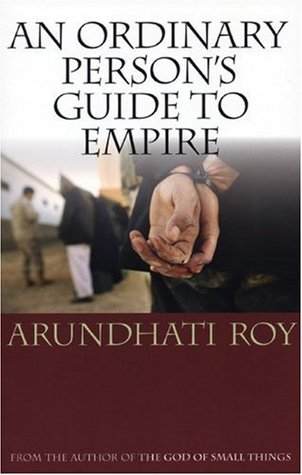 ISBN: 9780896087279
Pages: 200
Description: Just in time for the elections, Arundhati Roy offers us this lucid briefing on what the Bush administration really means when it talks about “compassionate conservativism” and “the war on terror.” Roy has characteristic fun in these essays, skewering the hypocrisy of the more-democratic-than-thou clan. But above all, she aims to remind us that we hold the essence of power and the foundation of genuine democracy—the power of the people to counter their self-appointed leaders’ tyranny.

First delivered as fiery speeches to sold-out crowds, together these essays are a call to arms against “the apocalyptic apparatus of the American empire.” Focusing on the disastrous US occupation of Iraq, Roy urges us to recognize—and apply—the scope of our power, exhorting US dockworkers to refuse to load materials war-bound, reservists to reject their call-ups, activists to organize boycotts of Halliburton, and citizens of other nations to collectively resist being deputized as janitor-soldiers to clear away the detritus of the US invasion.

Roy’s Guide to Empire also offers us sharp theoretical tools for understanding the New American Empire—a dangerous paradigm, Roy argues here, that is entirely distinct from the imperialism of the British or even the New World Order of George Bush, the elder. She examines how resistance movements build power, using examples of nonviolent organizing in South Africa, India, and the United States. Deftly drawing the thread through ostensibly disconnected issues and arenas, Roy pays particular attention to the parallels between globalization in India, the devastation in Iraq, and the deplorable conditions many African Americans, in particular, must still confront.